Sigiriya rock rises 200 meters above lush green jungles, and is a declared UNESCO World Heritage Site. Asia’s oldest landscaped gardens and ponds encircle this rock fortress, and at its summit is the renegade King Kasyapa’s “palace in the sky”. Fifth century ingenuity and skill produced a luxurious royal citadel with ramparts, moats, gateways, and a well laid out city, complete with bathing pools and gardens. On the climb up you could view the Mirror Wall, which still produces a glass-like reflection 1500 years after it was first created. Also on the way up you would see the famous Sigiriya frescoes – exquisite images of bare-breasted maidens painted on the rock face thousands of years ago. Located in the Cultural Triangle, Sigiriya is situated in the district of Matale.

The spectacular ruins of Sigiriya point to an equally dramatic history. Never has the paranoia gripping a patricidal king, produced such stunning results. In 473 AD, King Dhatusena was imprisoned and buried alive by his base-born son Kasyapa, who then proclaimed himself king. Mugalan, his half-brother and true heir, fled to India to gather an army to avenge his father’s murder. Meanwhile Kasyapa, fearing an attack, built his impregnable fortress 200m above the jungle, on the 1.6 hectares atop Sigiriya rock. He also constructed two extensive and fortified precincts on the eastern and western approaches to the rock. When the invasion finally happened, and Kasyapa lost and took his own life, Sigiriya became a monastic refuge.

The approach to the rock is via the main western gate, which takes you through the delightful water gardens with its royal bathing pools and little islands, which acted as dry-season palaces. A series of steps then steeply ascends the rock face. About halfway up the rock, you will find a long sheltered gallery, where the famous frescoes of beautiful young women is found. They are the only non-religious ancient paintings to be seen in Sri Lanka, and are similar to those found in the Ajantha caves in India. Recent excavations have been rewarded with the find of small clay figurines of the Sigiriya maidens, thought to be souvenirs made for the many visitors to the rock, from the 7th to 9th Centuries. Beyond the frescoes is the 3-metre high ‘mirror wall’, which is full of graffiti about the painted ladies by such visitors.steps

At the northern end of the rock is the platform from which the fortress gets its name – Sigiriya (Lion Rock). At one time, two large brick lions sat on either side of the final ascent to the summit, but only the paws on either side of the stairway exist today. Although only the foundations of the palace remain today, you can still see the huge swimming pool and throne room. The view from up here can only be described as magnificent. On your way down, you will pass the cobra hooded cave dating back to the 2nd century BC. The interior was once embellished with floral and animal paintings.

Two star class hotels in the area have a great view of the rock, and you can also find cheaper accommodation quite easily in the area. There are regular buses to Dambulla and Kandy, or you can travel by car.

The Gardenslookout
Setting Sigiriya apart from other medieval fortresses in addition to its unique position, are three distinct garden forms. A symmetrical water garden, an asymmetric boulder garden and a series of concentric terraced gardens were laid out at the base of the rock. A sophisticated sense of aesthetics as well as a knowledge of almost modern hydraulics, produced these astonishing grounds.

Boulder Gardens
The asymmetry of this garden with its many caves forms a perfect contrast to the order of the water garden, yet harmonizes with it perfectly. Buddhist monks had used the caves here since the 3rd century AD before they were incorporated into the gardens.

Terraced Gardens
These terrances have been compared with the Hanging Gardens of Babylon, each terrace being higher than the previous one. An amazing underground network of pipes with valves, ring mains, man-holes, conduits and other complex hydraulic features lie below the whole Sigiriya complelion's_terracex.

Lion Platform
At the northern end of Sigiriya are two gigantic lion’s paws resting against the rock, with steps leading up between them. These are all that’s left of an enormous lion built to intimidate Kasyapa’s enemies and giving Sigiriya its name. The steps earlier led up through the mouth for the final climb.

Frescoes
Undoubtedly it is the renowned frescoeverginss or rock paintings of Sigiriya that have brought it most fame. Half way up the rock is a long gallery of artwork sheltered by an overhanging ledge. Once numbering about 500, only 22 remain of an extensive backdrop of paintings depicting sensuous, celestial nymphs or apsaras, rising from clouds. The frescoes are the only secular paintings from the ancient era of Sri Lanka. They display stunning diversity of detail in dress and are similar to paintings at the Ajanta Caves in India.

Mirror Wall
The Sigiriya paintings have inspired centuries of ancient graffiti written by admiring visitors on a highly polished wall called the Mirror Wall. The graffiti includes beautiful poetry from_airand forms a fascinating catalogue of the evolving Sinhala language through the ages.

Palace Ruins
At the summit, every available inch of space was utilised, but only the foundations of the unique palace remains. The higher western side accommodated the inner palace while the outer palace was built on the eastern side. A massive pool cut into the rock was probably used for storage. Kasyapa’s throne cut from solid stone, where he sat 1500 years ago watching for his brother’s return, still remains. 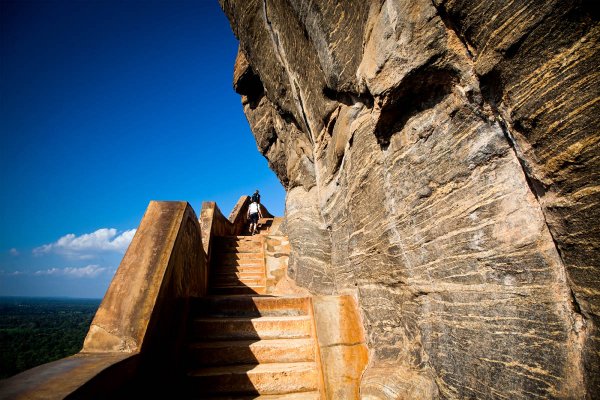 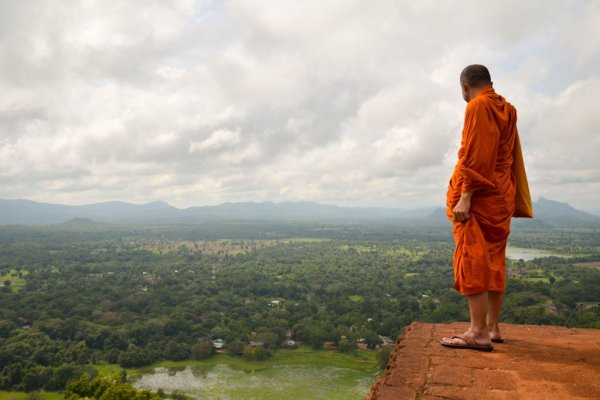