Dambulla’s cave temples are cut out of an enormous granite outcrop that rises more than 160m above the surrounding countryside and offers majestic views across the plains of the dry zone as far as Sigiriya, over 20km distant.
Note that it’s best to visit the caves in reverse order, starting at the end (cave 5) and working backwards – this way you get to see the caves in gradually increasing degrees of magnificence, culminating in the wonderful cave 2.

Brief history
The cave temples date back to the days of Vattagamini Abhaya (also known as Valagambahu or Valagamba; reigned 103 BC and 89–77 BC). Vattagamini lost his throne to a group of Tamil invaders and was forced into hiding for fourteen years, during which time he found refuge in these caves. Having reclaimed his throne at Anuradhapura, Vattagamini had temples constructed here in gratitude for the hiding place the rock had offered him – the individual caves which now house the temples were created by building partition walls into the space beneath what was originally a single huge rock overhang. The cave temples were further embellished by Nissankamalla – while comprehensive restorations and remodellings were carried out by the Kandyan kings Senerath (1604–35) and Kirti Sri Rajasinha (1747–82) – the latter also created the magnificent Cave 3 and commissioned many of the vast number of murals that now adorn the interiors. Most of what you now see dates from the reigns of these last two kings, although precise dating of individual paintings is made difficult, since these are traditionally repainted on a regular basis once their paintwork fades, and further changes and embellishments were added right through to the twentieth century.

Cave 5
The small and atmospheric cave 5, the Devana Alut Viharaya (“Second New Temple”), is the most modern of the temples, and unlike most of the site’s other statues, which are fashioned from solid rock, the images here are made of brick and plaster. The main figure is a 10m reclining Buddha. On the wall behind his feet are paintings of a dark Vishnu flanked by Kataragama with his peacock to the right and Bandara (a local deity) to the left. To the right of the door (as you exit) is a mural of a noble carrying lotus flowers, perhaps the man who endowed the temple.

Cave 4
Cave 4, the Paccima Viharaya (“Western Temple” – although cave 5, constructed later, is actually further west), is relatively small. Multiple identical figures of seated Buddhas in the meditation posture sit around the walls, along with a few larger seated figures, one (curtained) under an elaborate makara torana arch. A small dagoba stands in the middle; the crack in the side is the work of thieves who broke in, believing the dagoba to contain the jewellery of Vattagamini Abhaya’s wife, Queen Somawathie. As in cave 5, the walls are covered with pictures of Buddhas and floral and chequered decorative patterns, most of which were heavily repainted in the early twentieth century.

Cave 3
Cave 3, the Maha Alut Viharaya (“Great New Temple”) was constructed by Kirti Sri Rajasinha, and is on a far grander scale – the sloping ceiling reaches a height of up to 10m and gives the cave the appearance of an enormous tent, lined with over fifty standing and seated Buddhas. To the right of the entrance stands a statue of Kirti Sri Rajasinha, with four attendants painted onto the wall behind him. The meditating Buddha, seated in the middle of the cave, and the sleeping Buddha by the left wall, are both carved out of solid rock – an extraordinary feat in an age when every piece of stone had to be hacked off using rudimentary chisels.

The murals
Cave 3 has several interesting murals. Two ceiling paintings show the future Buddha, Maitreya, preaching in a Kandyan-looking pavilion. In the first (look up as you enter the cave), he preaches to a group of ascetic disciples; in the second (to the right of the entrance) he addresses a gathering of splendidly adorned gods in the Tusita heaven, where he is believed to currently reside pending his arrival on earth roughly five billion years from now. To the left of the door as you exit (behind a pair of seated Buddhas) is another interesting mural showing a picture of an idealized garden with square ponds, trees, elephants, cobras and Buddhas – a rather folksy, nineteenth-century addition to the original Kandyan-era murals.

Cave 2
Cave 2, the Maharaja Vihara (“Temple of the Great Kings”), is the biggest and most spectacular at Dambulla, an enormous, sepulchral space measuring over 50m long and reaching a height of 7m. Vattagamini Abhaya is credited with its creation, though it was altered several times subsequently and completely restored in the eighteenth century. The cave is named after the statues of two kings it contains. The first is a painted wooden image of Vattagamini Abhaya himself (just left of the door furthest away from the main entrance); the second is of Nissankamalla, hidden away at the far right-hand end of the cave and almost completely concealed behind a large reclining Buddha – a rather obscure fate for this most vainglorious of Sinhalese kings.

The sides and back of the cave are lined with a huge array of Buddha statues. The main Buddha statue on the left of the cave, set under a makara torana in the abhaya (“Have No Fear”) mudra, was formerly covered in gold leaf, traces of which can still be seen. To either side stand wooden statues of Maitreya and Avalokitesvara or Natha. Against the wall behind the main Buddha are statues of Saman and Vishnu, while images of Kataragama and Ganesh are painted onto the wall behind, an unusually varied contingent of Theravada, Mahayana and Hindu gods within such a small space.

The murals
The ceiling and walls of Cave 2 are covered in a fabulous display of murals – the finest in Sri Lanka. On the ceiling at the western end of the cave (to the left as you enter), Kandyan-style strip panels show pictures of dagobas at Sri Lanka’s holy places and scenes from the Buddha’s life (you can just make out the small white elephant which appeared in a dream to the Buddha’s mother during her pregnancy, symbolizing the rare qualities of her future child). These murals pale in comparison, however, with the three adjacent ceiling panels showing the Mara Parajaya (“Defeat of Mara”), which depict the temptations meted out to the Buddha during his struggle for enlightenment at Bodhgaya. In the first he is shown seated under a beautifully stylized bo tree whilst crowds of hairy grey demons attack him with arrows (one technologically advanced devil even carries a musket), supervised by a magnificent Mara riding on an elephant. This attempt to break the Buddha’s concentration having failed, the next panel, the Daughters of Mara, shows him being tempted by bevies of seductive maidens. The Buddha’s triumph over these stupendous feminine wiles is celebrated in the next panel, the Isipatana, which shows him delivering his first sermon to a vast assembly of splendidly attired gods.

Across the cave, sitting in a wire-mesh enclosure in the right-hand corner, is a pot that is constantly fed by drips from the ceiling; it’s said never to run dry, even in the worst drought.

Cave 1
Cave 1, the Devaraja Viharaya (“Temple of the Lord of the Gods”) is named after Vishnu, who is credited with having created the caves; a Brahmi inscription outside the temple to the right commemorates the temples’ foundation. Inside, the narrow space is almost completely filled by a 14m-long sleeping Buddha, carved out of solid rock, which preserves fine traces of beautiful gold gilding on his elbow (often covered). By the Buddha’s head, images of Vishnu and other figures are hidden behind a brightly painted wooden screen, while a statue of the Buddha’s most faithful disciple, Ananda, stands at his feet. The cave’s unusual murals are quite badly eroded in places; some are said to be the oldest at the site, though constant repainting over the centuries has dulled any clear sense of their antiquity; the bright frescoes behind Ananda’s head (including a weird tree sporting an Italian-style cherub) are clumsy twentieth-century additions.

Outside, next door, is a small, blue chapel dedicated to Kataragama; a bo tree stands opposite.

Golden Temple
At the bottom of the steps up to the cave temples stands the bizarre Golden Temple, a shamelessly kitsch building topped by a 30m seated golden Buddha. A nearby sign claims this to be the largest Buddha statue in the world – although in fact it’s not even the biggest in Sri Lanka (the actual largest Buddha statue in the world, at Leshan in China, stands over twice as tall at 71m).

Golden Temple Buddhist Museum
At the foot of the golden Buddha statue sits the Golden Temple Buddhist Museum, entered through the golden mouth of an enormous lion-like beast. The museum itself is large but rather lacking in exhibits apart from some dull copies of the cave temple paintings, a few Buddhas donated from around the world and a sprinkling of other artefacts, none of which is labelled. 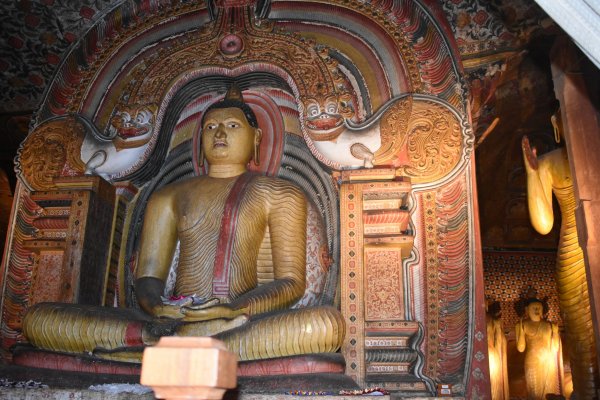 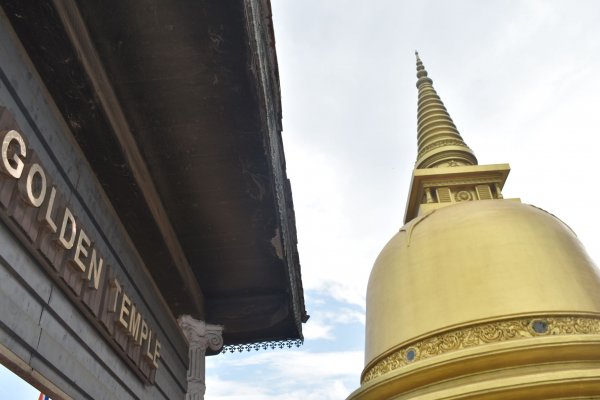 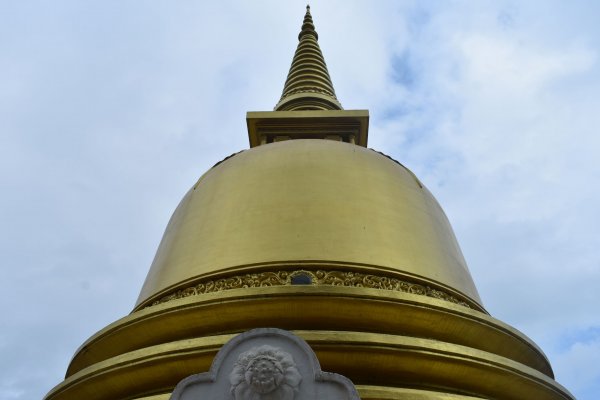 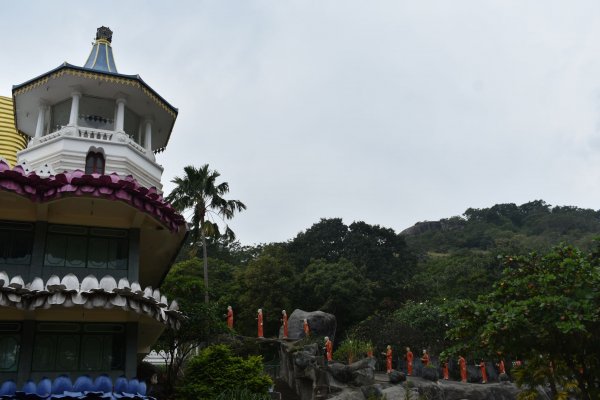 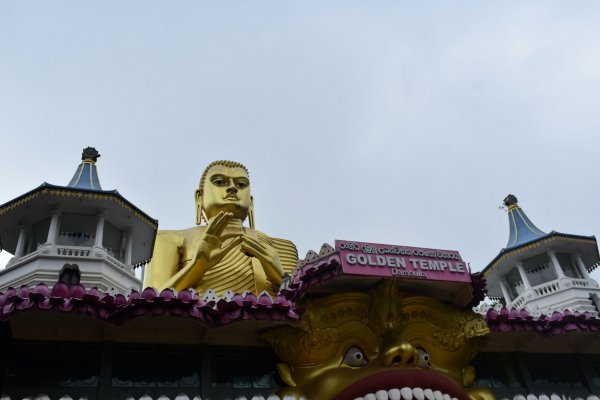 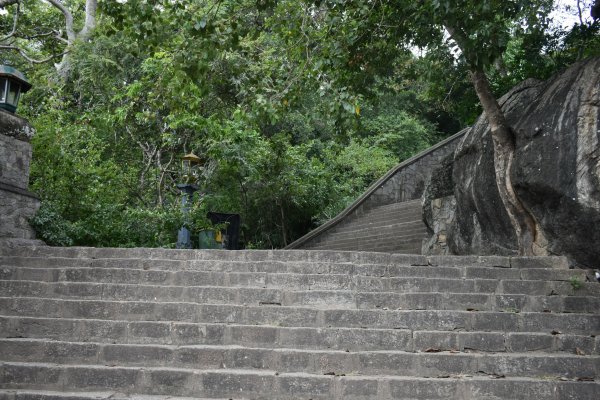 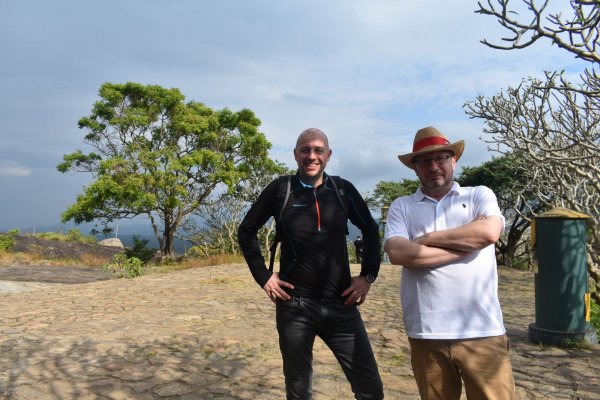 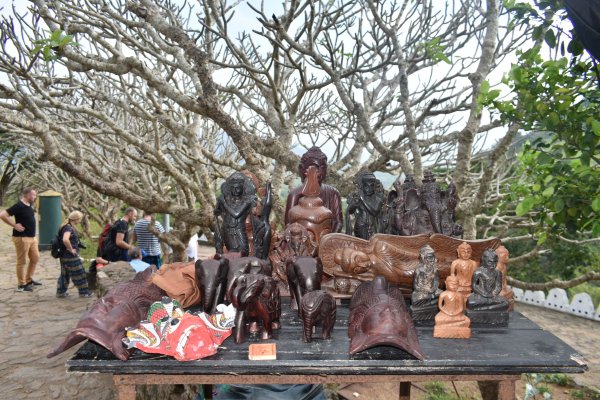 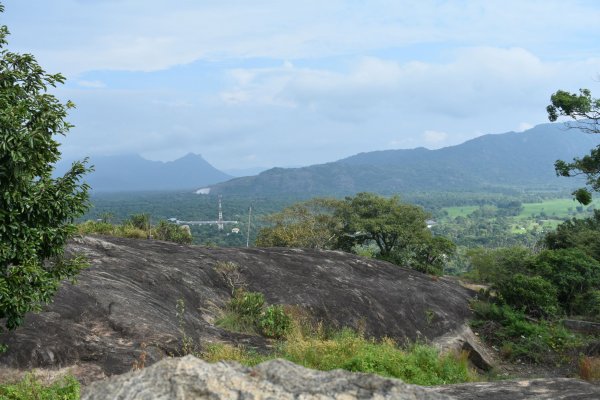 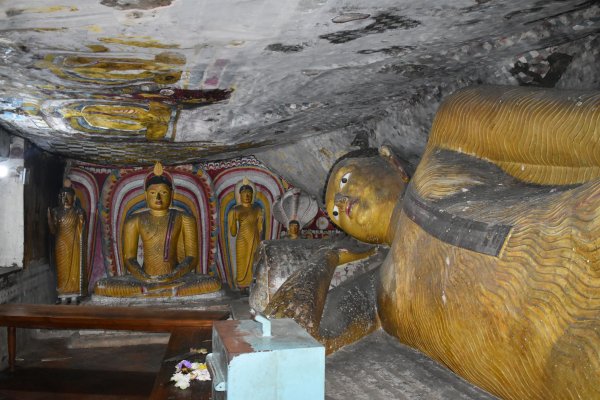 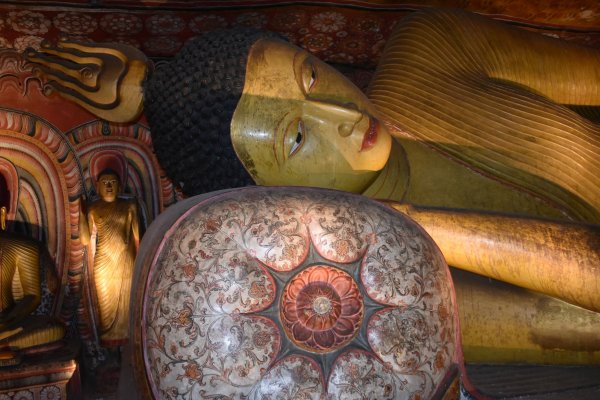 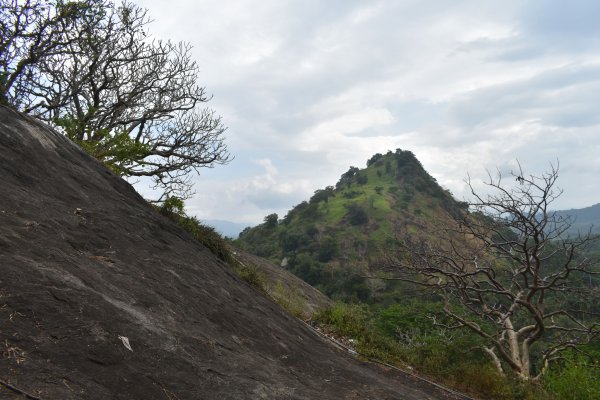 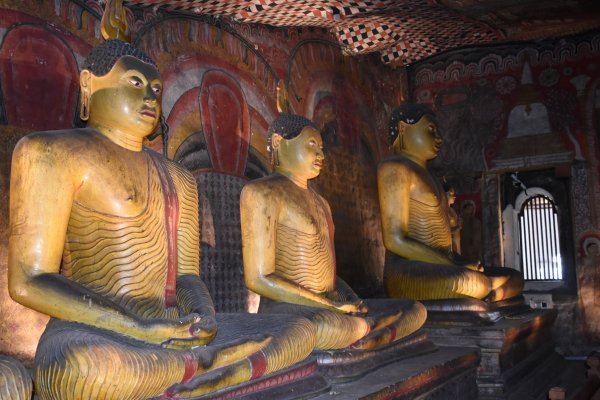 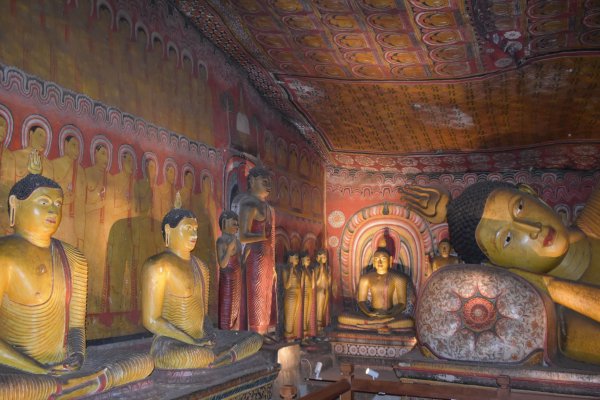 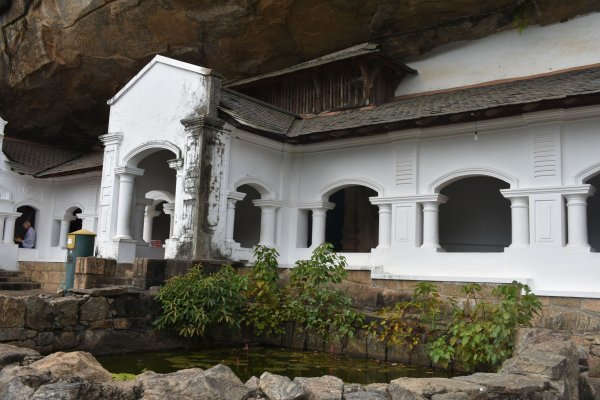 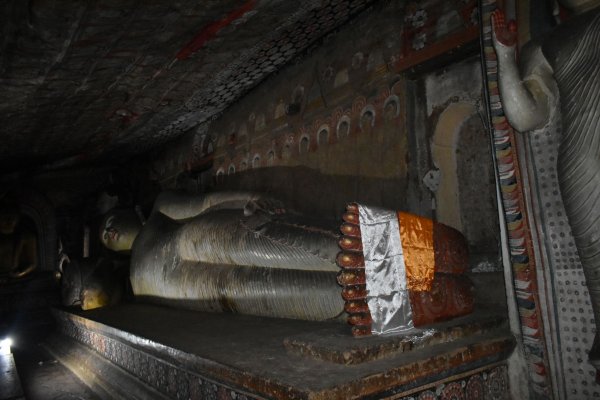 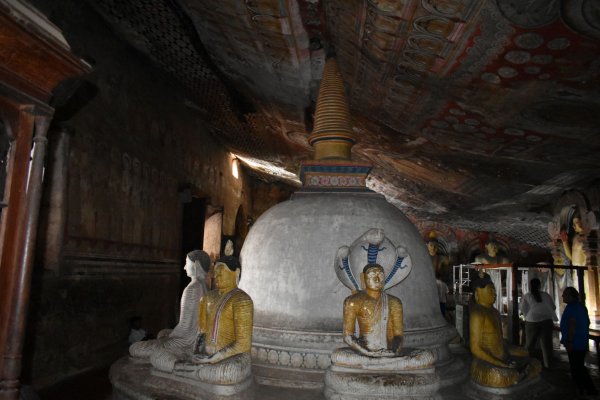 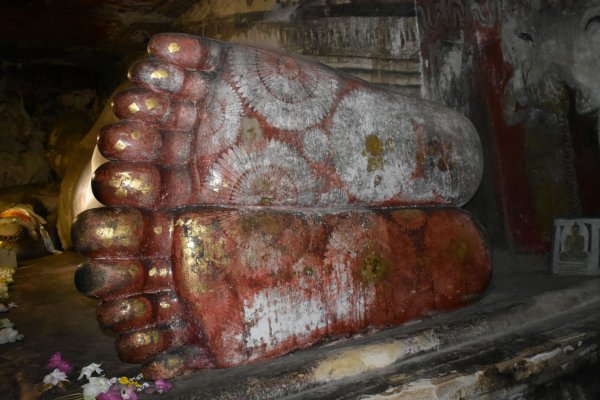 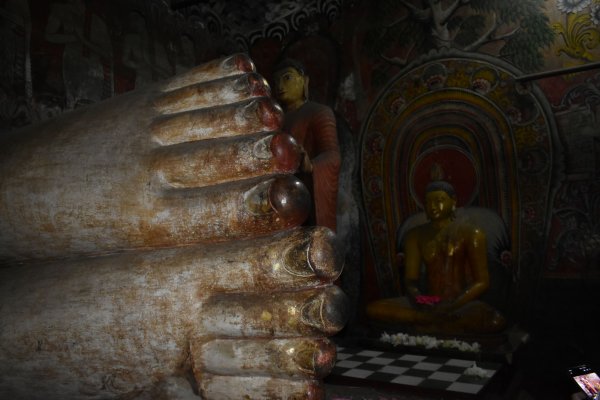 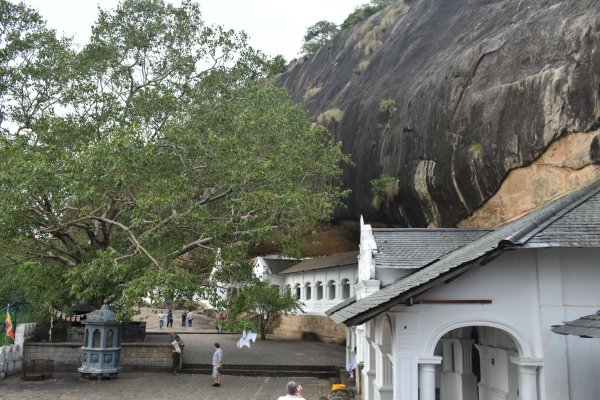 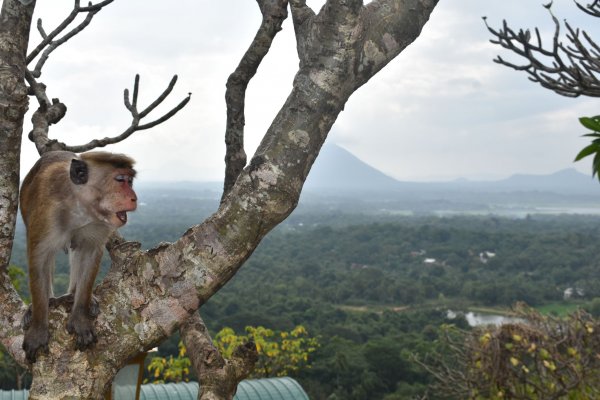 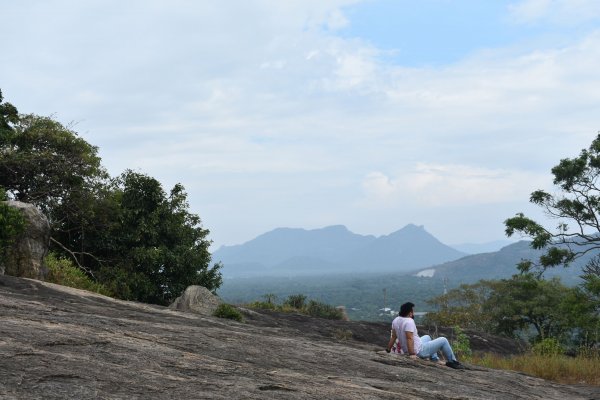